What is the Solar Thermal?

There are two forms of solar thermal: active and passive solar thermal. In the first case, these are specific systems for the storage and direct use of solar energy. In the second, solar energy is passively used on immovable buildings which, thanks to a rational positioning of the glass surfaces, structures for the transport of heat and a careful choice of construction materials, it is possible to accumulate thermal energy for heating the home.

The most widespread and convenient application for private individuals of low temperature active solar thermal is that for the production of hot water, which can be used both for domestic use and for heating environments and swimming pools.

It is a capturing plate which, thanks to its geometry and the properties of its surface, absorbs solar energy and converts it into heat (photothermal conversion).

This is an insulated tank, in which there is a heat exchanger in which the heat transfer fluid of the primary circuit circulates which, by releasing the heat received from the sun, heats the water contained in the accumulator.

eventual: pump for water circulation and electronic control unit that detects the temperature parameters and manages the operation of the pump.

First of all, the energy source used, the sun, is a renewable source (i.e. it can be used indefinitely) and is at no cost, its use depends only on weather conditions

It is a reliable, tested technology, present for over 20 years on the world market and simple to install and generally to integrate with an existing system and finally with low maintenance costs.

It is a clean and environmentally friendly technology: there are no emissions of Co2 (carbon dioxide), which is one of the causes of the overheating of the earth, nor of other atmospheric pollutants, such as sulfur dioxide, nitrogen oxide. on the contrary, by reducing the consumption of electricity and therefore of the fuels necessary for its production, there is a reduction in emissions of greenhouse and polluting substances

Hot Water Production for Domestic Use

Solar thermal allows you to save on your energy bill, covering two thirds of the domestic hot water needs of a family (a family of 4 on average consumes 200 liters of hot water per day + 30 liters per day for the washing machine. With 1 panel of approximately one square meter you can to heat at an average temperature of 45 ° an average of 80-130 liters of water per day, therefore 2 panels are sufficient to meet the needs of an average family with a saving of up to 70% on the energy needed to produce hot water ).

In the warmer months it is able to completely cover the needs of a family, without the need for the boiler to start up. In the winter months the efficiency of the system drops from 80 ° C to 40 ° C, in any case the panels continue to preheat the water, which reaches the boiler at a temperature higher than that of the aqueduct. This allows the boiler to reach the desired temperature in less time and with less energy consumption the boiler works less and lasts longer. 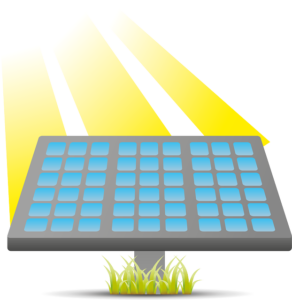 The solar system produces hot water that can be used directly by some particular household appliances on the market, such as the washing machine which has a double connection for hot and cold water, and the dishwasher designed for direct connection to hot water. By avoiding the use of electrical resistances of household appliances to heat the water, the consumption of electricity can be further reduced.

The solar system can be used in a combined way both to produce domestic hot water and to integrate heating, with further savings in the energy bill, up to 40% of consumption. The heating system that best matches the solar thermal system is the one with radiant panels (floor, wall and ceiling) which work at a low temperature of 30 ° -35 ° C, while the classic radiators need a temperature of 60 ° -70 ° C. With hot water around 30 ° C it is possible to obtain room heating at 20 ° C.

Furthermore, compared to the operating temperature of the radiators (80-85 ° C), the lower temperature required by the radiant panels (30 ° C) causes less heat loss.

On average, 80% of a home’s energy expenditure is for heating

The combined solar system for hot water and winter heating needs a greater exposure surface than that for the production of hot water only (the surface of the collectors varies from 7 to 20 m2 and tanks from 300 to 2000 liters). It is advisable to use vacuum tube solar panels which guarantee, especially in winter, a yield of about 20-30% higher than flat panels.

The pool requires a water temperature of around 25 ° -28 ° C, to achieve which solar panels are very effective.

If the pool is used only in the summer period and even if it is located in a cold climate area, it is convenient to use non-glazed plastic or rubber panels, as although they have a lower performance than glass panels, they are less expensive.

In any case, the system does not need a storage system for the swimming pool. Solar panels are also used to heat the water for the shower.

These systems use non-toxic substances and work even at low operating temperatures (fluid from 45 – 90 ° C)! This system is based on the evaporation and condensation of a thermostatic fluid in order to lower the temperature of an object.

Even if the absorption refrigeration system is not as efficient as traditional refrigeration systems, since there is a need for cold during the summer season, when solar radiation is very abundant, and often the energy accumulated by the solar collectors can be too much compared. when used, solar cooling systems can exploit this energy to produce cold and therefore allow to reduce costs and electricity consumption due to air conditioners. Solar cooling is generally used to cool the air in the home, but if you have enough energy, you can cool refrigerators or other. Their diffusion is still in an experimental and expensive phase.

Increase in the Value of the Property

With the installation of a solar system, the value of the property increases as it improves its energy class. For new buildings there is an obligation to install solar panels aimed at making the buildings autonomous from the point of view of the production of hot water.