The demand for energy for air conditioning has increased considerably in recent decades and the trend is strongly growing in different areas of the world.

Almost all air conditioning systems work with electricity or to a very limited extent with gas.

The large-scale use of traditional air conditioning systems based on so-called “vapor compression” electric cooling units causes various problems in terms of high energy consumption, environmental impact and overload of the distribution network in the summer.

In general, although this may at first glance be contradictory, it is possible to use heat instead of electricity to activate a cooling cycle.

The solar cooling systems are based on particular technological processes of production of cold that allow the use of heat produced by a solar thermal system as the main energy source.

General principle of operation of a solar cooling system

The use of solar energy for summer air conditioning is a very fascinating and technically very appropriate solution given the coincidence of the demand for cooling with the greater availability of energy. In addition to summer use, the solar system can also be advantageously used for winter heating, thus allowing a decrease in energy expenditure throughout the year, with further benefits in economic terms.

At present there are various technologies for the exploitation of solar energy in the conditioning of environments. At the moment, the solar cooling systems that find greater application are:

Among these, those existing on the market today are absorption and adsorption chillers for the production of chilled water.

These are the so-called DEC (Desiccant and Evaporative Cooling) air treatment cycles that use dehumidifying materials in a solid state (less frequently also liquid). These systems are based on the combination of dehumidification processes by adsorption and evaporative cooling where the refrigerant in circulation is water.

The dehumidification of the air by adsorption 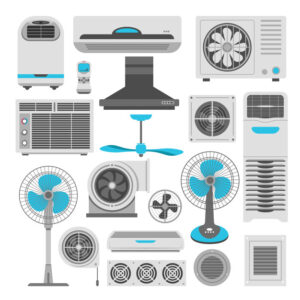 In air treatment processes, the latent load linked to the dehumidification of the air is of considerable importance. Air dehumidification by adsorption exploits the physical process by which the water vapor molecules contained in the air are deposited on the internal surface of a highly porous material. The water vapor from the air migrates to the surface of the adsorbent material due to the partial pressure difference. When, due to the adsorption process that has taken place, it becomes saturated and becomes hot and humid, the pressure gradient decreases until it reaches equilibrium.

For the subsequent elimination of water vapor from the saturated desiccant material, it is necessary to bring the latter into contact with a stream of hot air whose temperature depends on the type of material used (regeneration phase). In DEC systems, the regeneration temperature is of the order of 50-90 ° C depending on the application.

The materials most used in drying dehumidification systems are silica gel, lithium chloride and zeolites.

The system uses the new DEC technology with cooled fixed beds or CPB (Cooled Packed Bed). Thanks to the use of this technology, the heat released during the air dehumidification phase can be disposed of by means of a flow of cooling water. This has several advantages from an energy point of view compared to the solution based on dehumidifying rotors, and in particular:

From a comparison of the dehumidification processes considered, the advantages of DEC technology with cooled fixed beds are evident.

As part of the Solar Heating and Cooling (SHC) program of the International Energy Agency (IEA), several scientific studies have been conducted by experts in the sector that have demonstrated the following aspects: